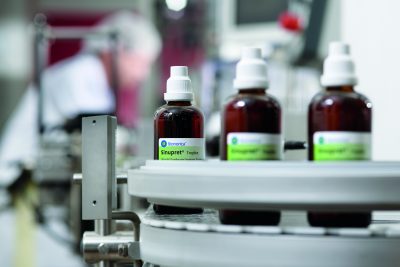 Bavarian pharmaceutical manufacturer Bionorica trusts in solutions from Romaco, one of the leading global suppliers of processing and packaging equipment, when it comes to automating liquid production – from depalletizing through unpacking and bottle inspections to cartoning.

For over 85 years now, Bionorica has been unlocking the healing power of nature to produce herbal medicines that are claimed to be effective and also well-tolerated and very successfully too. Bionorica has grown from the original one-man firm to a global player employing some 1700 people and operating in more than 40 countries worldwide. The owner-run German company has its headquarters in Neumarkt (Bavaria) and is mainly known for Sinupret that claims to be the nation’s number one cold remedy in terms of sales, which is also available internationally.

At Bionorica’s Neumarkt site, non-sterile liquids are filled and packed in glass bottles on two liquid lines for therapeutic nose, throat and lung applications. To improve the overall equipment effectiveness of its liquid production, Bionorica decided to automate various steps that were previously executed manually. In addition to depalletizing and unpacking of ‘safe packs’ – foil-sealed packs providing maximum protection for several dozen glass bottles − feeding and inspection of the bottles are now also fully automated, initially on one of the company’s two liquid lines.

Furthermore, the idea is that all modules on the packaging line will in the future deliver the same high level of performance. Although the filling machine theoretically has a maximum output in the region of 200 bottles per minute, this figure has never actually been reached in practice because the machine’s capacity has so far been unmatched by the performance of the other modules, notably the cartoner. It was for this reason that Bionorica opted to replace every module on the line apart from the filling machine.

Four of the modules on the new packaging line are from the Karlsruhe-based Romaco Group, which claims to develop, manufacture and distribute GMP-compliant, high-tech system solutions for the pharmaceutical industry.

“Romaco has a broad, premium-quality product portfolio – which is a great advantage when implementing complex plants like ours because it means we can source several machines from just one supplier,” explains Howard Fick of Bionorica’s Engineering department. “They also convinced us with good value for money, solutions that are individually tailored to our needs and prompt, efficient support.”

In the first section of the fully automatic liquid line, the glass bottles delivered in safe packs are automatically depalletized and unpacked with the help of a Romaco Macofar MED 003 depacking system. They are then passed to an inspection unit, featuring a new technology developed jointly by Romaco and Bionorica for detecting and removing faulty bottles. In the next step, the bottles are fed via a rotary table to the filling machine, where they are filled with the product, fitted with a screw cap and labeled. A Romaco Promatic PC 4250 continuous motion cartoner subsequently packs the bottles into cartons together with a leaflet. Finally, they are serialized with a 2D code and then packed into cases, sealed and serialized again by a case packer-palletizer before being automatically loaded onto pallets at the end of the line.

Servo motors in the depacking machine simplify format changes. Once the safe packs have been depalletized, the Romaco Macofar MED 003 depacking machine cuts open the thermo-shrink plastic packaging material with three heated, moving blades. Unlike conventional depacking systems, the MED 003 has a separate servo motor for every single movement, so that the unpacking parameters can be individually programmed for any safe pack type and stored according to the format. The format change time – Bionorica uses 30, 50 and 100 ml bottle sizes – is dramatically reduced because far fewer format parts have to be replaced with the MED 003 compared to depacking machines with a single, central motor.

To prevent damage to the filling machine due to faulty bottles, Bionorica collaborated with Romaco to develop a simple, space-saving solution for monitoring empty bottles. This inspection unit, which goes by the name of Spectra, is necessary because Bionorica uses blow-molded glass bottles as primary packaging for its medicines. About 1 or 2% of these containers are outside the tolerance range – for example, they are not exactly vertical or the bottom is too thick. In the past, such bottles regularly damaged the filling machine, with lengthy stoppages being the outcome. “An inspection unit capable of meeting our requirements, with damage avoidance as its sole purpose, didn’t yet exist, which is why we took the decision to collaborate with Romaco and design a new solution,” Fick reports.

“Spectra is not only an exact-fit answer to our needs; it was also much cheaper than any of the standard products on offer in the market, which in any case were way too complex for our situation.”

The Romaco Promatic PC 4250 was integrated into Bionorica’s liquid line as an advanced cartoning module that has no problem keeping pace with the filling machine.

“Aside from the very short ramp-up phase, the PC 4250 particularly impresses with its ease of handling and straightforward maintenance,” says Gerhard Garthe, area sales manager at Romaco and responsible for supporting all Romaco technologies in place at Bionorica. “In practical use, the PC 4250 completes toolless format changes in under thirty minutes and stack heights can be modified in less than ten.”

Each of the cartoner’s drives – for instance, for the infeed conveyor, the erection unit or the various closing groups – has its own torque limiter on the Promatic PC 4250. This is especially important on bottle lines, where individual components are subjected to very heavy loads.

Romaco’s customizing expertise came in useful in a number of ways while tailoring the cartoner to Bionorica’s highly specific needs. Amongst other things, it was important to Bionorica that the cartoner should have the ability to operate at two different speeds. In normal operation, the packaging line achieves around 200 bottles per minute, which is consistent with the performance limit of the filling machine. However, if the cartoner stands still briefly because a downstream machine has come to a halt, bottles collect in front of it on an accumulation table.

They are detected by the sensors installed in the cartoner and the speed is then temporarily increased to 240 cartons per minute, to enable the backlog to be cleared. As a result, the filling machine upstream from the cartoner is not required to interrupt operation and there is no loss of performance on the line as a whole.

Complete liquid production is realized with Romaco technologies. The new liquid line has been up and running at Bionorica in the final configuration since the end of 2018. Bionorica predicts roughly 20% higher productivity compared to the old line as soon as all the settings are optimized.

The company’s second liquid line is about to be upgraded in the same way – starting with another Romaco Promatic PC 4250 cartoner, which is in the process of being commissioned at Bionorica. In the future, the Bavarian pharmaceutical manufacturer’s complete liquid product range will be packaged using Romaco technology.

Marchesini focuses on serialization and inspection machines at Interphex 2020